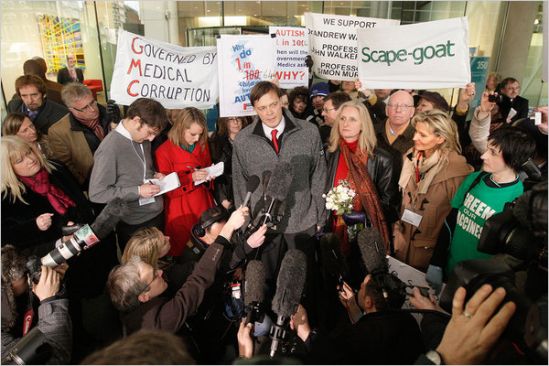 THE "WAKEFIELD" STUDIES: STUDIES HYPOTHESIZING THAT MMR CAUSES AUTISM
Dr. Paul Offit, M.D., FAAP, Chief of Infectious Diseases and Director of the Vaccine Education Center at Children's Hospital of Philadelphia. Those who claim that MMR causes autism often cite two papers by Andrew Wakefield and colleagues. This section summarizes those studies and lists their critical flaws.

In 1998, Andrew Wakefield and colleagues published a paper in the Lancet titled "Ileal-lymphoid-nodular hyperplasia, non-specific colitis, and pervasive developmental disorder in children."(1) Wakefield's hypothesis was that the MMR vaccine causes a series of events that include intestinal inflammation, loss of intestinal barrier function, entrance into the bloodstream of encephalopathic proteins, and consequent development of autism. In support of his hypothesis, Dr. Wakefield described 12 children with neurodevelopmental delay (8 with autism). All of these children had gastrointestinal complaints and developed autism within 1 month of receiving
MMR.

STUDIES SHOWING THAT MMR VACCINE DOES NOT CAUSE AUTISM

Four studies have been performed to refute a causal association between receipt of MMR and autism.

In 1999, Brent Taylor and coworkers examined the relationship between receipt of MMR and development of autism in an excellent, well-controlled study.(3) Taylor examined the records of 498 children with autism or autism-like disorder. Cases were identified by registers from the North Thames region of England before and after the MMR vaccine was introduced into the United Kingdom in 1988. Taylor then examined the incidence and age at diagnosis of autism in vaccinated and unvaccinated children. He found the following: 1) the percentage of children vaccinated was the same in children with autism as in other children in the North Thames region; 2) no difference in the age of diagnosis of autism was found in vaccinated and unvaccinated children; and 3) the onset of "regressive" symptoms of autism did not occur within 2, 4, or 6 months of receiving the MMR vaccine.

A second study by Brent Taylor and coworkers examined the relationship between MMR vaccine and "new variant autism" (Wakefield's claim that autism is associated with inflammation of the small intestine).(6) Children with autism diagnosed between 1979 and 1998 were examined. The authors compared the number of children with autism and intestinal symptoms before 1988 and after 1988 (MMR was introduced into England in 1988). There was no difference. They concluded that there was, therefore, no evidence for "new variant autism" and provided further evidence that MMR vaccine was not associated with autism.

STUDIES ON THE ETIOLOGY OF AUTISM

Studies have focused on the genetics of autism and the timing of the first symptoms of autism.

Timing of development of autism

Studies of 1)the genetics of autism, the timing of the first symptoms of autism (home-movie studies), 3)the relationship between autism and the receipt of the MMR vaccine, 4)the histopathology of the central nervous system of children with autism, and 5)thalidomide, natural rubella infection, fragile X syndrome, and tuberous sclerosis all support the fact
that autism occurs during development of teh central nervous system early in utero.

Unfortunately, for parents who will someday bear children diagnosed with autism, the controversy surrounding vaccines has diverted attention and resources away from a number of promising leads.