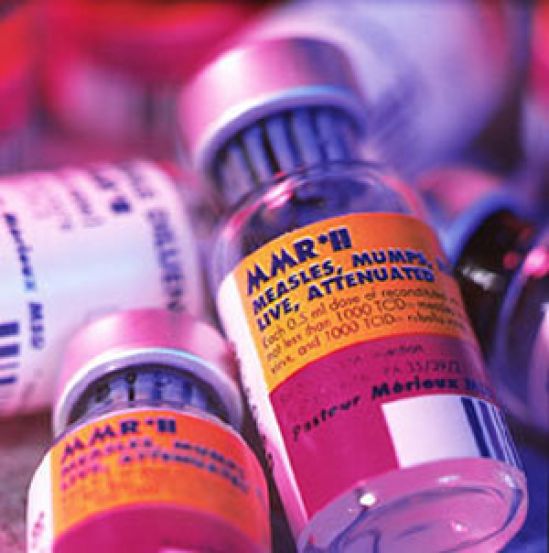 ABSTRACT
The measles, mumps, rubella (MMR) vaccine was added to the childhood
immunization schedule in Denmark in 1987. From 1998 to the present, there has
been concern over whether there is an association between MMR vaccination and
autism. Prevalence of autism by age category during 1980 to 2002 was
investigated, using data from a nationwide computerized registration system, the
Danish Psychiatric Central Register, in order to compare the periods preceding
and following introduction of MMR vaccine.
Prior to a classification change in 1993/1994 and a change in enrollment in
1995, an increase in autism prevalence was noted. Linear regression analysis was
performed separately on the trend during 1990 to 1992, the period that preceded the
introduction of both effects. The prevalence in 2000 could then be derived excluding the
sources of ascertainment bias. Prevalence of autism among children
aged 5-9 years increased from a mean of 8.38/100,000 in the pre-licensure era (1980-
1986) to 71.43/100,000 in 2000 and leveled off during 2001-2002. The relative risk (RR)
is therefore 8.5 (95% CI, 5.7 to 12.7). After adjusting for greater diagnostic awareness,
the RR is 4.7 (95% CI, 3.1 to 7.2). Among individuals less than 15 years old, the
adjusted RR is 4.1 (95% CI, 3.5 to 4.9). Longitudinal trends in prevalence data
suggest a temporal association between the introduction of MMR vaccine in
Denmark and the rise in autism. This contradicts an earlier report.
Health authorities should develop safer vaccination strategies and support further
investigation of the hypothesized link between the MMR vaccine and autism.