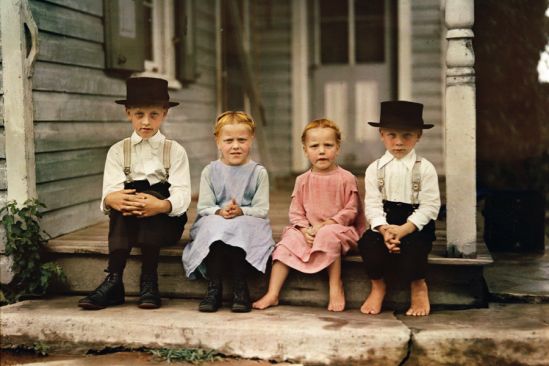 The Age of Autism: A glimpse of the Amish

WASHINGTON, June 2 (UPI) -- Part 1 of 2. Recently, a man named Dick Warner got in touch with us. He has been following this column's search for Amish people with autism and said he might have something to contribute.

Warner lives in Cochranton, Pa., but his business -- water purification and natural health -- takes him into Amish households around the nation.

"I've been working with Amish people since 1980," he said. "Since early '99 I have been in a high concentration of health work with the Amish. I just came back from a trip where I visited the 89th Amish community I've been invited to.

"So I've been in all the styles of Amish that there are. They invite me to sleep in their homes. They feed me. I pray with them. I know their traditions. I'm going to an Amish wedding tonight in southern Illinois and next Thursday I have another wedding.

"I have seen so much in an intimate way with the Amish, and boy, did it pique my interest when I looked at your research."

That research has centered on the Amish to try to determine whether an isolated population in the United States has the same prevalence of autism as the "English," as the Amish call the rest of us. The idea: Because Amish ways are so different -- from what they eat to how they spend their time to the fact that most do not vaccinate their children -- they might offer clues to autism.

That is, it is important to know whether their autism rate is notably different. So far, there is evidence of fewer than 10 Amish with autism; there should be several hundred if the disorder occurs among them at the same 166-1 prevalence as children born in the rest of the population. The Amish have big families, and they should also have autism.

The problem is the same thing that makes the Amish worth looking at makes them more difficult to reach. They don't mingle with or marry into the wider population. They don't have phones or cars.

Still, several people who should know have told me they see little or no autism -- way less than you'd expect. One is an Amish-Mennonite woman from Lancaster County, Pa. She has an autistic daughter, but that child was adopted from China. She said she is aware of two more Amish children with autism; in one case, she said, the disorder was clearly associated with a vaccination given at 15 months. (Most medical experts dismiss a link between autism and vaccines, which contained a mercury-based preservative until a phase-out began in 1999.)

A family doctor in Lancaster who has treated thousands of Amish over a quarter-century said he has never seen an Amish person with autism. A pediatrician and geneticist in Virginia told me he was treating six Amish children with autism, none vaccinated. Four of the six had high levels of mercury that he believes came from coal-fired power plants, which emit mercury as a byproduct. He suspects that caused their autism.

My research among the Amish so far does not point a finger at any one cause, but if a much lower prevalence holds up under more scrutiny, it might suggest that something "environmental" -- in the broad sense of coming from outside the body rather than from a solely genetic or metabolic disorder -- could be the decisive trigger in a huge increase in autism cases.

Warner was offering an up-close glimpse. I asked him what he had observed.

"I've got to tell you, I have never seen an autistic Amish child -- not one," he said. "I would know it. I have a strong medical background. I know what autistic people are like. I have friends who have autistic children."

Warner said he has seen Amish with learning disabilities and mental illness and even helped two families get treatment for someone with schizophrenia.

I asked Warner how many Amish people he has met. "Tens of thousands," he said, though he acknowledged the total is "not even 60 percent" of the national Amish population, which is approaching 100,000.

Those who think the Amish autism rate is not a good test case make two main arguments: They are there, just not visible. Or, they are not there, but some genetic difference is protecting them from autism.

The genetic issue is beyond our ken -- although you would think if government health authorities considered it plausible, they would be doing urgent, well-publicized research. People like Warner make it harder to accept the first argument, that hundreds of autistic Amish are some kind of "hidden horde."

"They're so intimate with me, you couldn't imagine," Warner said. "They're talking about their bowels, their periods, their sex life. They trust me just like I'm a confidant, and I am."

Autism, he said, is not something they could or would hide from him. He invited me to come with him and meet Amish elders around the country and said he could provide entree into their world. Perhaps the Centers for Disease Control and Prevention would be interested in taking him up on that.

In the second part of this interview, we'll hear Warner's observations about how the Amish differ from the rest of us -- and how they don't.

This ongoing series on the roots and rise of autism aims to be interactive with readers and welcomes comment, criticism and suggestions. E-mail:  Questo indirizzo email è protetto dagli spambots. E' necessario abilitare JavaScript per vederlo.